The visit of the Cathedral Saint Maurice, March 12th, 2020 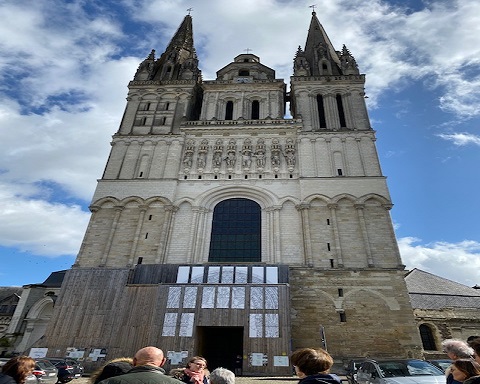 The visit of the Cathedral Saint Maurice took place on a sunny Thursday afternoon (March 12th, 2020 at 230pm). Inge Louineau, AIW's cultural visits' coordinator, met us in the cathedral itself.

Our guide, Magali Decraëne, took us first outside to see the facade of this historical, majestic building.  Built in the beginning of the 11th century by bishop Hubert de Vendôme, the new Romanesque cathedral with its unique vaults, was consecrated in 1025.  But it burned down in 1032, just after it had merely finished.  The bishop of Angers, Geoffray de Tours and later his successors Normand de Doué, Renaud de Martigny and William of Beaumont decided to reconstruct the cathedral. The altar crucifix was blessed in 1051, and the new altar was consecrated in 1096.  Finally, the new church was finished in the first half of the 13th century. 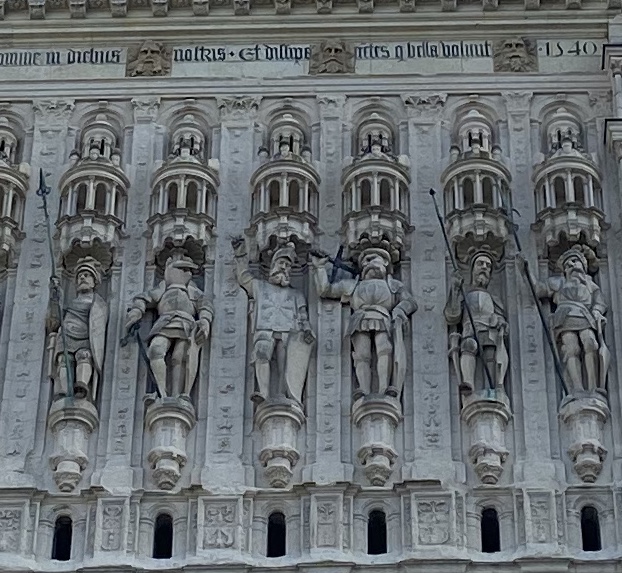 The gothic details can be seen clearly looking at the façade.  Also, we can see the different styles dating between the 12th and the 15th century.  The height of the two spires is resp. 70 and 77 m (229 and 253 ft).  The north one was built in 1518 and the south one in 1523.  As we looked up, we can see the statue of Saint Maurice (with raised hand - see picture) among his companions.

As we entered the cathedral again, we first took a look at the gothic Angevin style ceiling, also called Plantagenet style vaults.  Very impressive vaults indeed, built with no modern equipment as we know today.

Looking up at the main altar when you stand under the organ. the left side row of the stained glass windows are 12th century and the right side are 20th century  stained glass windows since the old ones were destroyed in WWII; the two rosaries and one is the Last Judgement and the End of Time (on left of the main altar) are made by master glassmaker André Robin in 1451.

Also there, as Magali pointed out to us, is a statue, Saint Cecilia (saint of musicians), made by local sculptor and artist David d'Angers (1788 Angers -1856 Paris), situated behind the main altar canopy. This canopy (1758; Denis Gervais), on marble columns, is gold plated oak wood, recently restored, can be seen also in other roman churches around the world. And it was inspired by the one in St. Peter's and Paul in Rome.

Then of main interest is the neo-gothic chair of the Abbot Choyer, all made of differents woods (cherry, oak)  which was installed in 1870 after 3 years of work and  the chair was consecrated by Bishop Freppel. Place Freppel and a statue of the latter bishiop can be seen in the back of the cathedral and is situated in front of the House of Adam (1491). Magali responded to our questions and comments, and at around 3pm, the successful visit came to an end.

Magali responded to our questions and comments, and at around 3pm, the successful visit came to an end. 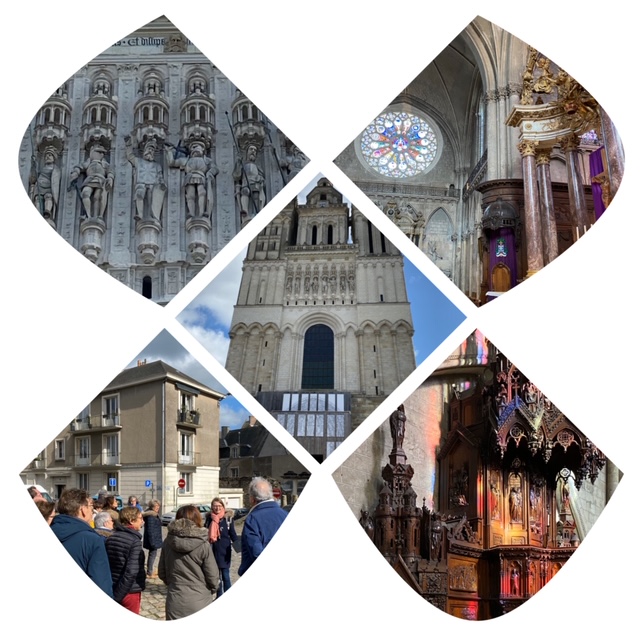